About 15 years ago, a struggling young VCU Brandcenter (then Adcenter) cadet had what he thought was a pretty good idea. He and his partner had a good laugh about it, sketched it up, made it better, and presented it with no less than 75 or 100 other ideas in their campaigns class. The professor liked it, we produced it and we entered it into the Richmond Ad Club show. I was too poor (and introverted) to actually attend the show, but was told that our little idea won Student Best of Show. We received what I still think is one of the five best creative trophies out there. A Richmond Show cannonball. (A very appropriate award for a town that saw more than its share of Civil War cannons.)

That very same award has sat on every desk for every job that I have ever had. That heavy paperweight reminds me of how hard I worked to get through graduate school, how important a good partner and good Creative Director is, and how much fun advertising, creativity and business can be. It’s also special because the Richmond Ad Club wasn’t any ordinary student show—this was where the best creative students in the world were competing. What I didn’t know until later, was that a professor paid for our copy of the cannonball trophies behind the scenes. That professor was none other than Mark Fenske. You can find Mark here, where he just posted a great article about humility that you should read immediately after this. Not sure I ever properly thanked him. 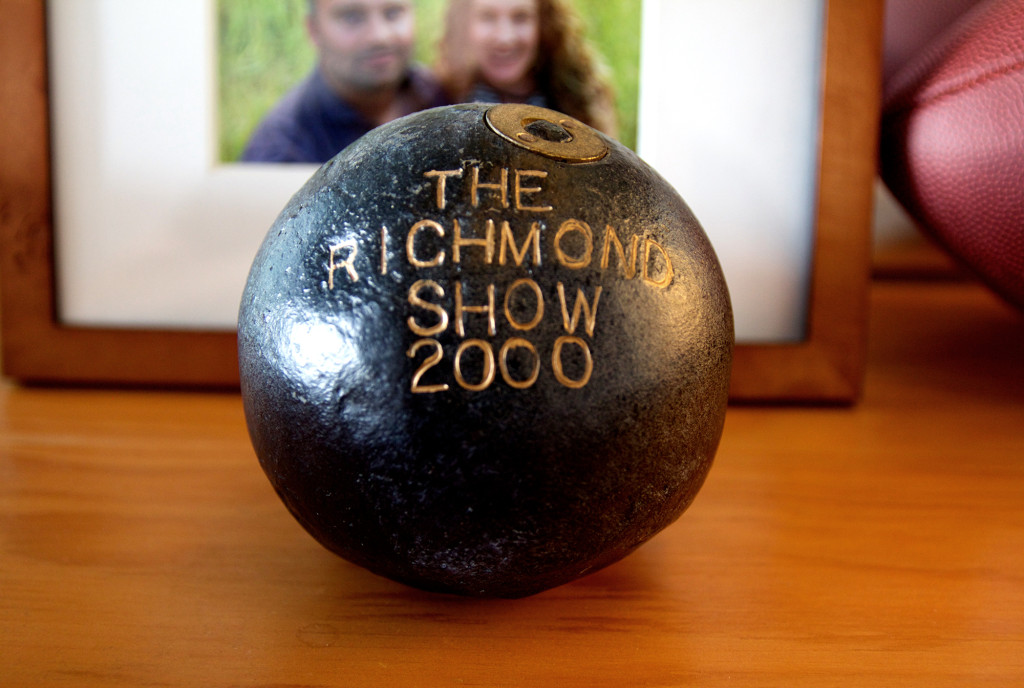 Why do I tell you this story? Well, to provide a little balance I suppose.

I am locally famous (sic) for pitching an idea to my former employer called, The Bonfire of the Vanities. That event was a would-be block party, concert, bonfire event to be held in downtown Phoenix, during which we intended to burn all of the awards the agency had ever won,  and invite other agencies to do some of the same. Yep. In a big blaze of glory. We even had the fire department permits. The plans. The date. Everything. I wanted to replace a wall of dusty advertising awards of varying degrees of reputation, with a renewed dedication to a higher power – true creative excellence. Since I was the new Creative Director, my job was to right that ship. The bonfire never happened in 2013, as the owner backed out a month before the event. I think partly because of fear and partly because of indecision over what to do with the empty space on the wall. Or he simply thought it was stupid as was his right. The idea did scare everyone (which I think is funny in an industry full of people that call themselves rebels, there is an awful lot of zigging). But the bonfire—as bombastic and crazy as it sounds—was actually me treading lightly.

What I really wanted to do was burn down the whole industrial-award complex.

Too bad, this would have been a fun event: 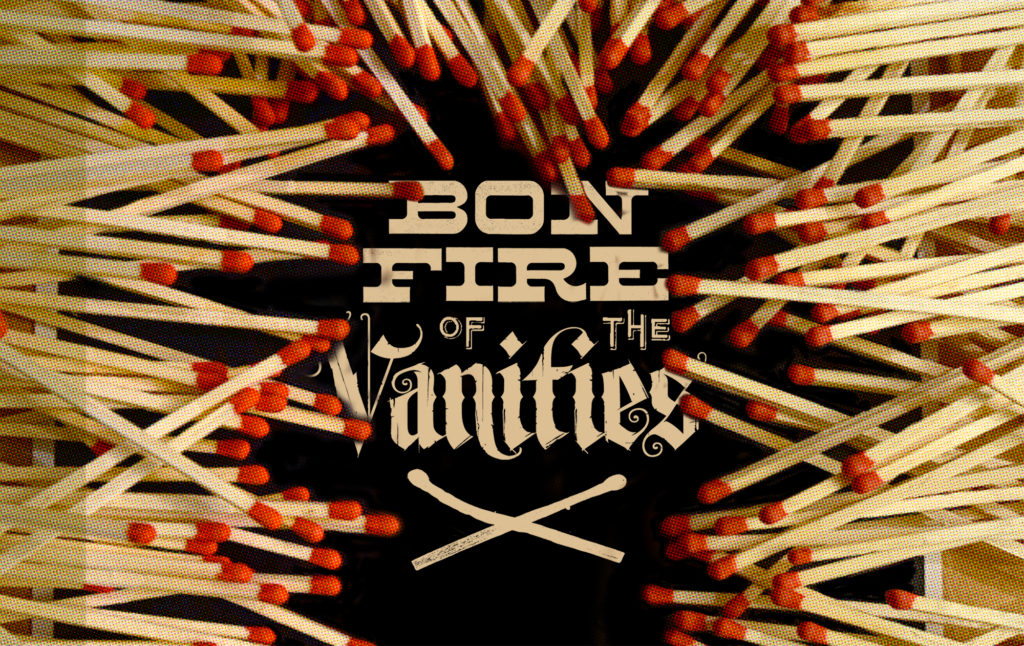 Since my VCU days, I’ve watched as advertising has become ever more addicted to an ever-growing number of award shows with each passing year. All designed to tell everyone how awesome they are. Every agency is an award-winning agency, because it’s that easy to win. Something. Somewhere. For something. When you become an agency owner, you are forced to put your money where your mouth is and decide what matters. I’m not convinced most of these award shows matter and don’t get me started on Ads of the World and similar sites. Is it wrong that I just don’t really care?

I’m not the only one.

For the biggest agencies there is growing angst about awards too. Amir Kassaei, Chief Creative Officer at DDB Worldwide, recently wrote an article called, The End of False Recognitions. In it, he discusses the focus on awards as one of the biggest problems in ad-land. (And I include digital-land and design-land for my purposes.)

Too many of us in the industry have bought into the idea that winning awards is proof of creative effectiveness, so much so that we’re willing to sacrifice our integrity to get them. And in turn that has lessened the integrity of the awards themselves. So if we believe that we are a great creative or an amazing agency or a great network because we won such and such meaningless award in a sub-sub-sub-category at an advertising awards show where ad people award ad people’s irrelevant solutions for problems that often do not even exist, then we’d better think again.

Kassaei’s article got a LOT of attention and a lot of feedback, most of it negative. I’d like to take an optimist’s view however and assume Kassaei’s intentions are honest. Perhaps because I can relate.

At the small agency level, things get really messy.

We’re a small agency at least at the moment. Ten people on a good day. I think we’re producing work that is far above our weight-class. In our first almost-year, we have more than our share of work we could submit to shows. All of it would do well on the local level. Some would do well on the national level. But are awards really what we are about? Do we care more about external gratification than we do about internal satisfaction of solving problems, with craft and creativity? Do I really want to spend $10,000 dollars entering work in a local show; a week of everyone’s time preparing the work for submission, worth another $15,000 – is that a good use of our resources? Do those awards actually bring us new business? Increase our creative cred? Do they matter to us? Are they more important than taking that money and investing it back into our people, and taking that time and instead focusing on one of our client projects?

Shouldn’t agencies in a market as large as Phoenix begin to have higher aspirations instead of scrumming for participation awards? I think so.

I started a status meeting a few months ago and asked the staff if Magnetry could sit out of the award rat race, and instead truly focus on what is best for our clients and more to the point – focus on doing work that WE love. I asked if they were okay, with other local agencies (and their peers) possibly thinking we just didn’t have the chops. Or were cowards. Or were somehow disingenuous—maybe arrogant. I asked if they supported the move to be more discerning in what recognition we pursue. But before that, I had to ask myself and my team an even more fundamental question. Do we even have a choice? We want to show up in our first year, right?

The truth of the matter is, we already have shown up. I’m proud that this agency stands for something and for the reputation we’ve been building. We decided as a group to only do the things that matter to us, everything else be damned. Magnetry will not be defined by the awards we win. We will not be defined by the award shows we don’t enter either. We will be defined by work that sits in that wonderful space between client results and our own personal satisfaction. If you are familiar with the general creative discontent that fuels every single person here—you know that will be a high standard. It’s a cliche, but the work will speak for itself.

Here’s the deal about the Addys.

Well, now they want us to call them the American Advertising Awards… but the Addys are run by a non-profit called the American Advertising Federation, which made almost $7 million last year from the local and regional award shows. The shows themselves – I’ve probably judged ten of them over the years – are graded on a curve. You are strongly encouraged to award a certain percentage of gold, silver and bronze awards no matter the quality of the work. They are a terrible measure for creativity.

That doesn’t mean we are giving up entering award shows altogether. (There are agencies that don’t enter shows—Ehgad!— like my good friends at High, Wide & Handsome.) It does mean however, that when we enter something, it will be something we LOVE and at a show that we RESPECT. We are not going to act like desperate B-list celebrities vying for a dimming spotlight. Magnetry is a national agency, with national aspirations, and big-time, world-class creative goals. So when we enter something – it has to support those goals. The award shows that consistently award the best of the best are few and far between. I can count them on one hand.

So why write this article?

Well, it’s not to make people feel badly about entering award shows. That’s your call. Or at least the call of your agency leader. Good luck and have fun, I say. Yes, I would be embarrassed if we pretended these lucite trophies matter the way some local shops do but that’s not really the point. I simply feel like it was time to take a stand against a system that I think is flawed and increasingly irrelevant. I must do what is right for Magnetry and the people here, not follow convention. So while every other agency in the city will be spinning out PR articles about how they rocked the Addy’s next week, you won’t read one about us. (Go ahead and thank us now.)  The truth of it is, instead of prepping our work for a show, we’d rather spend our time focused on our clients and making the work better. That’s always been my idea of a party.

(By the way, if you want to know how I think we could fix local creative awards — I have some ideas.)