We Have Creativity All Wrong.

When you think of a creative, you most likely think of a mad-scientist without the science part. You think of someone who is messy, unorganized, and maybe even uninspired unless they receive a visit from a muse. You think of right-brained talent that needs to be managed, supervised, and directed by left-brain peers. Angst-ridden rock stars, neurotic painters, and malcontented writers are the poster children of creativity and are celebrated for their idiosyncrasies and madness as much as they are for their talent. If all that creativity wasn’t managed by someone, the theory goes, records wouldn’t be made, art wouldn’t be hung, and novels would succumb to the blank page.

In the advertising world, this notion of the irresponsible creative runs rampant is is perpetrated not just by the account and agency managers it benefits, but also unfortunately by the creatives themselves. 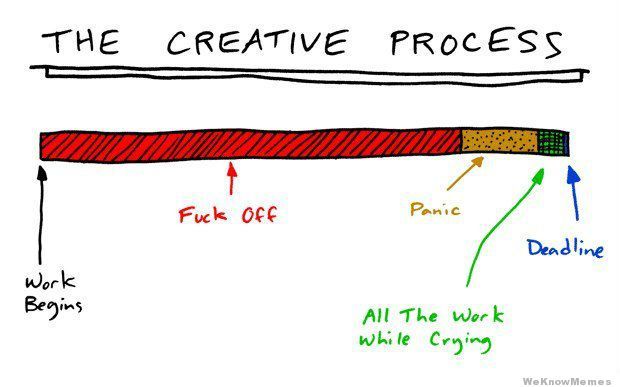 A lot of young creatives feel like they have to look and act the part of a creative and spend as much time doing that – than working on their craft. You grow your beard. Wear you hoodie. Come in late. Act surly. And pretend that deadlines don’t mean anything. “You’re creative!” Not only is this accepted to some degree, it’s celebrated. So what’s wrong with this? By accepting the irresponsible, disorganized and illogical labels of others we have relegated ourselves to the children’s table of business. Drinking out of sippy cups and having to be quiet while the adults (planners, accountants, executives, strategists, etc.) discuss the serious matters of the day.

When I started one job in my past, I started with a small team of two. (Yes, only 2.)  One creative was a competent, detail-oriented workhorse. The other was a surly, lazy, and disorganized employee. Both were talented and capable of great work. But only one was going to fit in the department I was building. My vision for the creative team was for it to be the most prepared, most accountable, most organized, most responsible and most strategic department in the building. And over three years, that was definitely the case by any measure. It made hiring significantly more difficult on the front-end, but we eventually had a robust team of creatives that bucked the traditional labels while producing solid marketing solutions. The person that more closely fit the rule-breaking, anti-social creative, had to go. (And we’ll come back to rule-breaking later. We do like breaking rules.)

I think it’s time we throw out the right brain vs left brain philosophy. It does nothing but put people in silos, and positions creatives as lacking logic, mathematical skills, and reasoning. It also gives far too much power to account managers and other creative handlers. Yes, creatives are different kinds of people and it’s this difference that makes us valuable. However, the best creatives have this talent in addition to—not in place of—the other attributes normally assigned to more business-minded professionals. That’s the magical part. As a matter of fact, this combination is what makes the best creatives good at what they do. This is great news for creatives. Great news for clients who want to work directly with the talent in an organization. Not so great news for all those students majoring in account management or for those agencies that have more account people than people creating the work. (And if you want to know how I’d select an agency if were a client – this would be the first measuring stick. There must be significantly more doers than managers and more doers that manage. It would easily eliminate most shops.)

Here’s a snapshot of the characteristics these new creatives demonstrate. Consider it a check-list for creatives that want to be taken more seriously, paid more appropriately, and have a seat at the big table.

This is What Creativity is About:

This list doesn’t paint the typical picture of a creative, does it? I find it odd that most organizations that pride themselves on creativity usually subjugate creatives under managers and executives who are more or less paper pushers or bean counters. (The agency world is full of this.) These managers are most often working in an industry or creative realm in which they do not fully understand but try so desperately to manage. It shouldn’t work and it doesn’t as well as it could. The truth of it is-creatives are the ones to blame. We have given our power away. If we want to gain more respect, have more control, and be in leadership positions in our fields; we have to shed the out-dated creative stereotypes and start claiming what is rightfully ours.

And here’s the irony. It’s a lot more fun this way.